Today, NYELJP met nearly sixty clients and supporters at the Kings County Supreme Court for a rehearing on their clients’ Article 78 petition against the 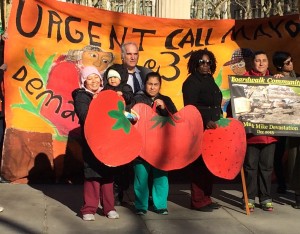 City and Developer iStar Financial.  After a rally on the courthouse steps, Executive Director Joel Kupferman, along with Of Counsels Rajiv Jaswa and Seth Korman, argued that the proposed Seaside Park and Community Arts Center, a $50+ million commercial development project just off the boardwalk in west Coney Island, would, among other problems, exacerbate flooding and stormwater issues in the area.  Moreover, the project would displace a community that has for years used much of the development space as a public park and garden—land that to this day is listed as a park by the NYC Parks Department.