While the New York City Housing Authority has continuously mentioned that their new ‘infill plan’ will ensure “that no public housing apartments would be demolished and no families displaced,” they have yet to mention any potential drawbacks in loss of open space, community centers, and recreational facilities. That being said, NYCHA has released pre-Request for Proposal (RFP) documentation on their website as a first step in allowing residents and fellow concerned New Yorkers to examine their intended plans. 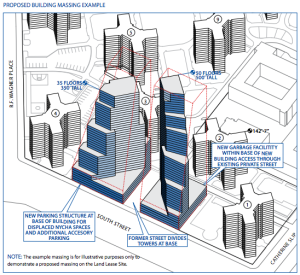 As you can see from many of the documents, including the map above of the Smith Houses’ South Street Site, many of these buildings are massive, significantly larger than any of the NYCHA buildings even, and will greatly impact residents’ availability for open space, light, and air. With such an influx of residents to these areas, it may produce even more diverse problems such as overcrowded public transportation. According to NYCHA, they are willing to receive, and in fact appreciate, feedback from residents regarding the pre-proposals. It will be an interesting turn in the actual RFPs to see if that take any resident advice into consideration; although with the round table meetings, it seems as though there is quite a slim chance of any real discussion. As truthfully stated by housing authority official Leroy Williams, “this is NYCHA’s property and we can do what we want with it.”